Kenmark's MD has been unwell and unconscious

June 2, 2010--According to Bursa's announcement at 16:49 today, the Independent Directors has today received a letter through the e-mail from Mr Hwang Ding Kuo @James Hwang, the Managing Director of Kenmark Industrial Co. (M) Bhd(Kenmark) informing of his present whereabout. Mr James Hwang has also requested the company to release a press statement for him.

Mr James Hwang in his letter has stated that he has been unwell and unconscious and was also uncontactable. He has now regained full consciousness but still physically weak. In the letter Mr James Hwang has proposed the appointment of Mr Ho Soo Woon, Encik Ahmed Azhar Bin Abdullah, Mr Woon Wain En, Datuk Adu. Gani Bin Yusof to manage the issues that have arisen in his absence. Two are proposed to be Executive Directors.

The Independent Directors will convene a meeting tomorrow morning by teleconference with the Taiwanese directors to consider the appointment and make the necessary announcement.

Blogger: This is very interesting. It seems that the factory in Taiwan and Vietnam have run into trouble a week ago. James said he was unwell. Then who is taking care of him while he was unconscious.

That is to say before James disappeared, there was a share buy-back program by the company. What did the company trying to do?

Kenmark is actively traded today with 139.7million shares changed hand. It is suspended on 4:43pm. It is the top volume counter today. 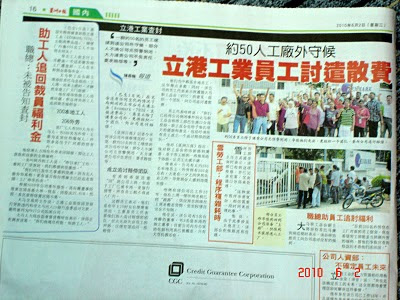 The newspaper's report about Kenmark's sudden closure
Posted by KC Goh(吳繼宗) at 2:18 AM